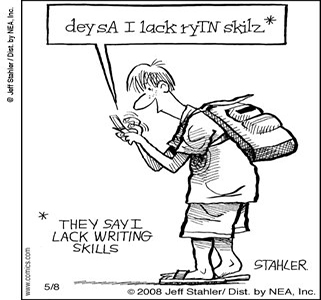 Perhaps I am giving away my age, but my children eventually spelled it out to me. “Stop putting LOLxx at the end of your texts mom,  it does not mean lots of love!”  😳

With the rise in the use of technology in children, there are increasing concerns about the impact of the use of this medium on written language.

Complaints about spelling and grammar are not new.

From every college in the country goes up the cry, “Our freshmen can’t spell, can’t punctuate.” Every high school is in disrepair because its pupils are so ignorant of the merest rudiments. (C.H. Ward 1917).

David Crystal (a British linguist and author) points out that the abbreviation IOU, for example, has been around since 1618 without any dire effects to spelling and grammar.

Despite the long history of concerns, there is still a feeling that ‘this time is different.’ 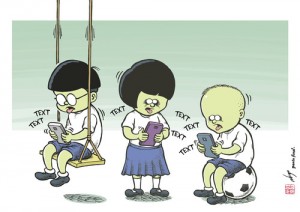 In order to understand texting, one needs to define language. Language is the method of human communication, either spoken or written. It consists of using words  in a structured and conventional way. Language is not the same as speech. Speech is the method that we use to deliver the information and refers to our voice, the way we say the words and sounds and how fluent we are.

John McWhorter, in his TED talk explains that texting is in fact a a whole new language and structure which he describes as ‘fingered speech.’  “People speak differently from the way they write, and texting — quick, casual and only intended to be read once — is actually a way of talking with your fingers.” For example, when we speak,  we don’t think about capital letters or punctuation. In the same way, when we text, we don’t really think about this because it is a different kind of written language.

There are a number of studies that have demonstrated a positive link between texting, and spelling. This is because  many of the most commonly used forms of text abbreviation are phonetically(sound) based.  Using abbreviations such as ‘gr8‘ or ‘l8‘ or even ‘btw’ makes  children think about the sounds in the word. Children could not be good at texting if they had not already developed an awareness of the sounds in the word. In order to  write and play with abbreviated forms, you need to understand how the letters relate to the sounds of the language and break up words into the component sounds.  The  awareness that texting behaviour is different, creates an awareness that there is a standard.

McWhorter feels that texting is developing its own kind of grammar. Take LOL. It doesn’t actually mean “laughing out loud” in a literal sense anymore. LOL has evolved into something much subtler and sophisticated and is used even when nothing is remotely amusing. Take the following conversation below. 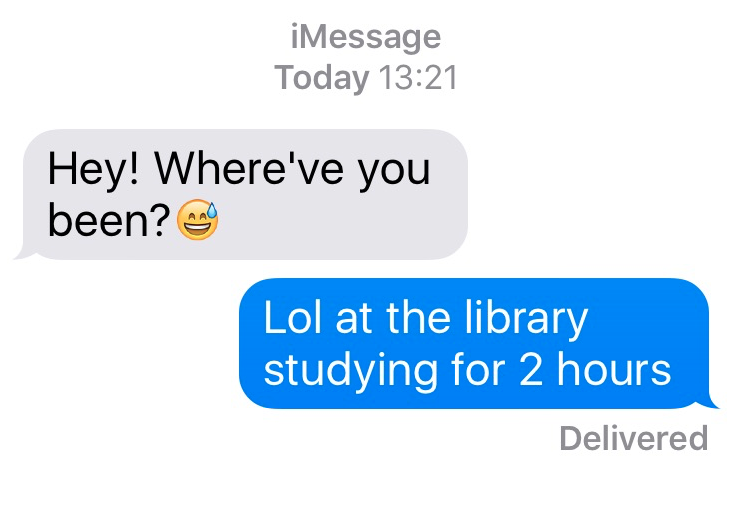 McWhorter explains that LOL signals basic empathy between texters, easing tension and creating a sense of equality. Instead of having a literal meaning, it does something — conveying an attitude — just like the -ed ending conveys past tense rather than “meaning” anything. LOL, of all things, is grammar. Trying out unconventional ways of combining words (you the best/you are the best), saving space while maintaining meaning (going now/I am going now), or adding emotion to a message (yay!!! ☺) encourages children to engage with the very grammatical conventions that they’re transgressing. 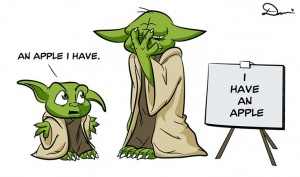 In face-to-face communication, nonverbal cues such as gesture, tone and facial expression provide a great deal of information to the listener.  When texting, this information is even more limited because the messages tend to be shorter.  The use of emoticons or emojis has contributed significantly towards ‘text grammar’ and allows the speaker and the reader to convey non-verbal information. For example adding a  😉  to a message allows the texter to convey that they are teasing.  An emoji can also be a stand alone response to a text.

E.g “Are you coming tonight?

Studies also show that texting can enable those who are shy or lack confidence to be more socially outgoing and participate more in classroom discussions.  I came across a teacher at a conference (unfortunately, I can’t recall who it was to give credit), who used twitter to set homework questions. Because twitter only allows 140 characters in the response, the students had to really think about how they constructed their answers in order to effectively answer the question. To me, that is a gr8 language task!

It still irks me to use word abbreviations when I text, but then I am clearly not a native ‘text talker’,  nor am I ‘bilingual.’ One just has to look at the speed that kids are able to text to see the difference in fluent texters versus 2nd ‘language’ learners. In my opinion, texting, just like any other language, is evolving and growing. There is some code switching between the two forms of written expression, but ultimately, fluent texters are able to discern the difference.  A 2014 study at Coventry University in the UK, reports that “young people seem well aware that different types of communication require different ways of writing. As long as young writers can maintain this awareness, then the violations of grammar common in digital communication need not be perceived as a reduction in writing skill, but rather as the addition of an alternative, casual style to the writer’s repertoire.”

Although it didn’t ‘win’ this is the first year that an emoji was allowed to compete, for the Word of the Year title. And if you have any doubt about the changing face of language then you will be interested to know that the singular  ‘they,‘  the gender-neutral pronoun, has been voted for Word of the Year for 2015