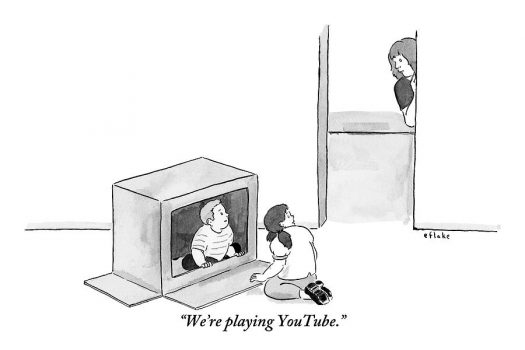 There are so many toys that get pumped by the media as being ‘necessary’ because of their educational value. In an effort to do what is best for their child, many parents run off to buy the new toy only to find that their child enjoys playing with the box more than the toy!

Although the benefit of play in children is well known, there are a number of studies that show that children are spending less time playing freely, and more time in structured activities.  Busy lifestyles, changes in family structure, and increased attention to academics and enrichment activities have been reported as some reasons for the reduction of play time.

An excellent post from Raised Good, highlights the increase in adult controlled activities to the detriment of unstructured play.  Consequently, children’s creativity is being stifled.

Why is play important for children?

Play is essential to development because it contributes to the cognitive, physical, social, and emotional well-being of children. Play without toys is one of the vital elements for developing pretend play. Pretend play, helps children practice their thinking, communicating, and interaction skills. Language and play are often linked.

Pretend play is also known as symbolic play because it involves the use of symbols. When we use symbols, we use something to stand for something else. When children use pretend play, they may use one object to stand for another, such as pillows and tables as a fort, or a cardboard box as a rocket.  Language involves the use of words (symbols) to represent our thoughts and ideas. Therefore, pretend play and language both involve the same underlying ability to represent things symbolically.

Pretend play develops in stages, in a similar manner to language. (Weitzman & Greenberg, 2002)

1. Self-pretend (12 – 18 months) : Children may pretend to eat, drink or sleep.  Toys are realistic and the may pretend to eat using a spoon or pretend to sleep by covering themselves with a blanket. During this stage children perform one action at a time.

2. Simple pretend (18-24 months): Children use simple pretend actions on toys or people. They still use realistic toys. For example, feeding a doll with a spoon, or making a toy aeroplane fly.

3. Series of familiar actions (24 -30 months): Children start to combine pretend actions together. This stage usually occurs at the same time that the child starts to combine words. The child may use a series of pretend actions that relate to a familiar routine. For example, making a cup of tea, adding milk and sugar and serving it to a doll. They can use less realistic objects as long as they are similar in shape to the real object. They may use a stick to stir the pretend tea.

4. Series of less familiar actions (30 – 36 months): Children may start to play doctor or shop. They can pretend without an object (they may pretend to hand over make-believe money). At this stage, they can also substitute objects that do not resemble the real thing. For example, they may use a block to represent a banana.

5. Role Play with other children (3 – 5 years): Children pretend about imaginary themes (things which do not really exist or that the child hasn’t experienced yet in real life), such as pirates, castles, and superheroes. Children start to pretend with other children at this stage, and take on different roles during the play. Realistic objects and toys are not needed as children can now pretend using gestures, mime, or unrealistic objects. Language often drives the play at this stage. Children explain their roles and use language to act out their role. For example, a child pretending to be a doctor might say to another child “I’m the doctor, you be the patient, ok?  Where does it hurt?” What toys should you buy?

Children, need to play, but this does not mean that you have to invest in every new toy on the market. The type of toy that you select, can  affect how a child plays.

The bells, whistles and flashes that accompany many ‘high-tech’ toys can inhibit play, interaction, and language.

Young children do not have long attention spans. Too many toys can be distracting for children and so they flit from one toy to the next without focusing on any single play activity.

ZERO to THREE has some tips for choosing open-ended toys. You can find the post here.

We are not failing our children by not  giving them every imaginable opportunity. Our children’s busyness is not a badge of honour (raisedgood.com), and children are not miniature adults.  So, when you hear the whine  “I’m bored”,  don’t be guilted into buying the latest toy, or scheduling a new activity to keep them occupied………Think about the value of leaving your child to play. And don’t forget the books!